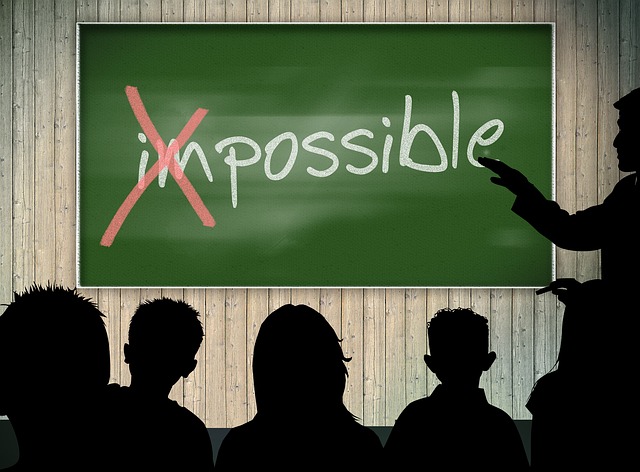 I heard a new song on the  radio on my way to church Sunday morning called “Impossible” by the group Building 429.  I heard it again Sunday evening during the blockbuster movie War Room, that I took my wife to see.  One of the definitions of this word Impossible from Merriam Webster is: felt to be incapable of being done, attained, or fulfilled :  insuperably difficult.  Years ago I read a great book by the late Ann Kiemel Anderson called I Love the Word Impossible.  This book talks about impossible situations in her life, and the reason that Ann Kiemel loved these, was that they caused her to bring them before God for fulfillment or completion.  These situations seemed impossible, but with God all things are possible! Often when something is seemingly impossible we limit our beliefs to this impossibility and defeat ourselves and the outcome before we even start.  Before Roger Bannister broke a four-minute mile, it was belived to be an impossibility though others had come close.  Once this record was broken (and only held for 46 days) other runners who before this point could not reach that goal were suddenly able to do so.

Reaching for an achievement, or starting something new can be challenging to our beliefs.  There are a lot of unknowns and possibilities for failure, that often keep us from moving ahead or succeeding. But the thing is, very few of what gives us a feeling of its impossibility is actually impossible when we surround ourselves with the team, tools, and resources we need to succeed.

As a Life Coach one of the things I deal with on a regular basis in clients, is a belief that accomplishing their dreams is impossible.  My job is to prove that it is not and to get them on the road to pursuing their dreams again, to open their eyes to the tools and resources they have at their disposal and to come along side them on their journey.